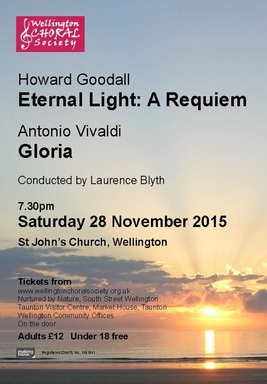 The church was full for this choral concert featuring two works, the first “Eternal Light – A Requiem” by Howard Goodall, and the second Antonio Vivaldi’s “Gloria”. Laurence Blyth, the Society’s Musical Director, as ever, coaxed his choir and the Wellington Sinfonia into performances which delighted all who were present. Diction can present problems, especially in this church’s acoustic, but the tuning and balance of the choir and orchestra was good throughout even if there was also a feeling at times that the sopranos and tenors need further support. The soloists, Catherine Luke (Soprano), Olivia Jane Gomez (Mezzo-Soprano), Andrew Henley (Tenor) and Adam Jondelius (Baritone) were uniformly excellent.

Howard Goodall offers an extended explanation about his Requiem. In essence he writes that he feels uncomfortable with the Catholic liturgical template used by many great composers. Instead he takes what he calls a “Brahmsian route” by counterpointing phrases in the original Latin with phrases drawn from a number of English poets. He further writes that “a modern Requiem is one that acknowledges the terrible unbearable loss and emptiness that accompanies the death of loved ones, a loss that is not easily ameliorated with platitudes about the joy awaiting us in the afterlife.”   He hopes that “musical expression can provide some outlet, some reflection, some transportation, even possibly some comfort.”

Even allowing for the absence of the dancers of the Ballet Rambert,(!) for whom Goodall wrote two of the movements, I confess to feeling under-whelmed by the work as a whole.  There are moments that delight, but there is little sense of a musical journey, of progression, of development. What you hear in the first movement is very like what you hear in the last, and in each movement in between. Musical motifs are repeated, passed around the different sections of the choir and orchestra, and seem to end up where they started. There is a sameness about all you hear which, I feel, no amount of skill – and there was much on offer in this performance – can conceal. Put another way, while the performance was certainly competent, the music did not engage me at any deep level, whether to “transport” or even to “comfort”. Perhaps one can’t have true comfort in the face of death unless one has also faced the realities of sin and judgement?
​
No such concerns arise when faced with the well-travelled path of Vivaldi’s “Gloria”. While the opening chorus lacked bite and crispness, as the work unfolded the splendour of Vivaldi’s glorious melodic and rhythmic invention, and his feel for the words of the text he was using, was fully explored. While the whole was very satisfying, even moving, for me the outstanding movement was the supremely sensitively sung and played Largo for soprano soloist, Catherine Luke, and oboe soloist, Ella Leonard.

The Society is in fine musical shape in the hands of Laurence Blyth, and they are to be congratulated on another excellent concert.  Mozart, Handel and Haydn await, in March.  Not to be missed!