The History of Wellington Choral Society 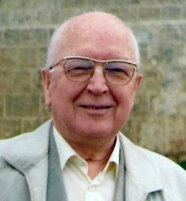 In 1940 Andrew Brunton, a well-known and popular local tenor who had performed in many concerts in Somerset and beyond, revived Wellington’s suspended Harmonic Society, renaming it the Wellington Choral Society. With the members of the old Harmonic Society came its Minutes and Accounts from 1901 to 1932 which the Choral Society retains ownership of today. ​ 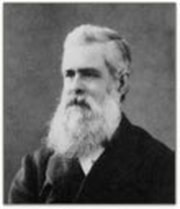 William Manley
Concerts had been held in Wellington since at least the mid-1800s.  On 14 December 1855 William Manley (below right), the schoolmaster at the town’s National School, together with Henry Crowe, a cornet player who was also the manager of the local gas works, presented their first concert at Wellington Town Hall.  William Manley’s concerts became an annual event and in 1871 Mr Manley founded, and was the first conductor of, the Wellington Harmonic Society.
​
In Victorian Britain choral societies and amateur choirs were playing an increasingly significant role in the musical life of the country and they were singing a repertoire that revolved around Handel’s Messiah.  William Manley conducted the Harmonic Society in the first performance in Wellington of Messiah on 18 April 1876.
​
The Harmonic Society flourished, adapting to the musical taste of the time when it put on a ‘miscellaneous popular’ concert in 1886 in the Town Hall which included glees and part-songs, as well as Haydn’s Surprise Symphony.  This popular style of concert continued through the 1890s and the first decade of the 20th century, though they occasionally performed a full choral work.
​
In 1914 activities of the Society were suspended, but were successfully restarted in 1919.  Membership numbers rose in the early ‘20s but towards the end of the decade they were slipping back, as musical tastes continued to change.  Listening to recorded music was becoming more popular.  With membership continuing to drop the Harmonic Society reluctantly took the decision in 1932 to suspend its activity for the time being. 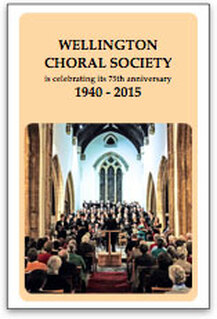 Andrew Brunton was the Choral Society's first conductor when he brought about its revival in 1940, but the early years were not easy.  Concerts were often financial losses, but for a time grants were available that would put the accounts back in credit.  Members' subscriptions were therefore vital, as they are still today, but they continued to have difficulty in recruiting new members.  They worried that the Society might be thought high-brow and they wanted to encourage younger people to join who 'enjoy music for its own sake'.

The object of the Choral Society was 'the practice and performance of good sacred and secular music’.  The years which have passed since the first concert was performed on a cold January evening in 1941 have shown that Wellington recognises the importance of that aim in the cultural life of the town and the Choral Society is grateful for all the support it has received from the people of Wellington over the years.  To mark its 75th anniversary the Society has produced a fascinating booklet giving a full account of its history, including much local history.  Copies can be purchased by ​contacting us.